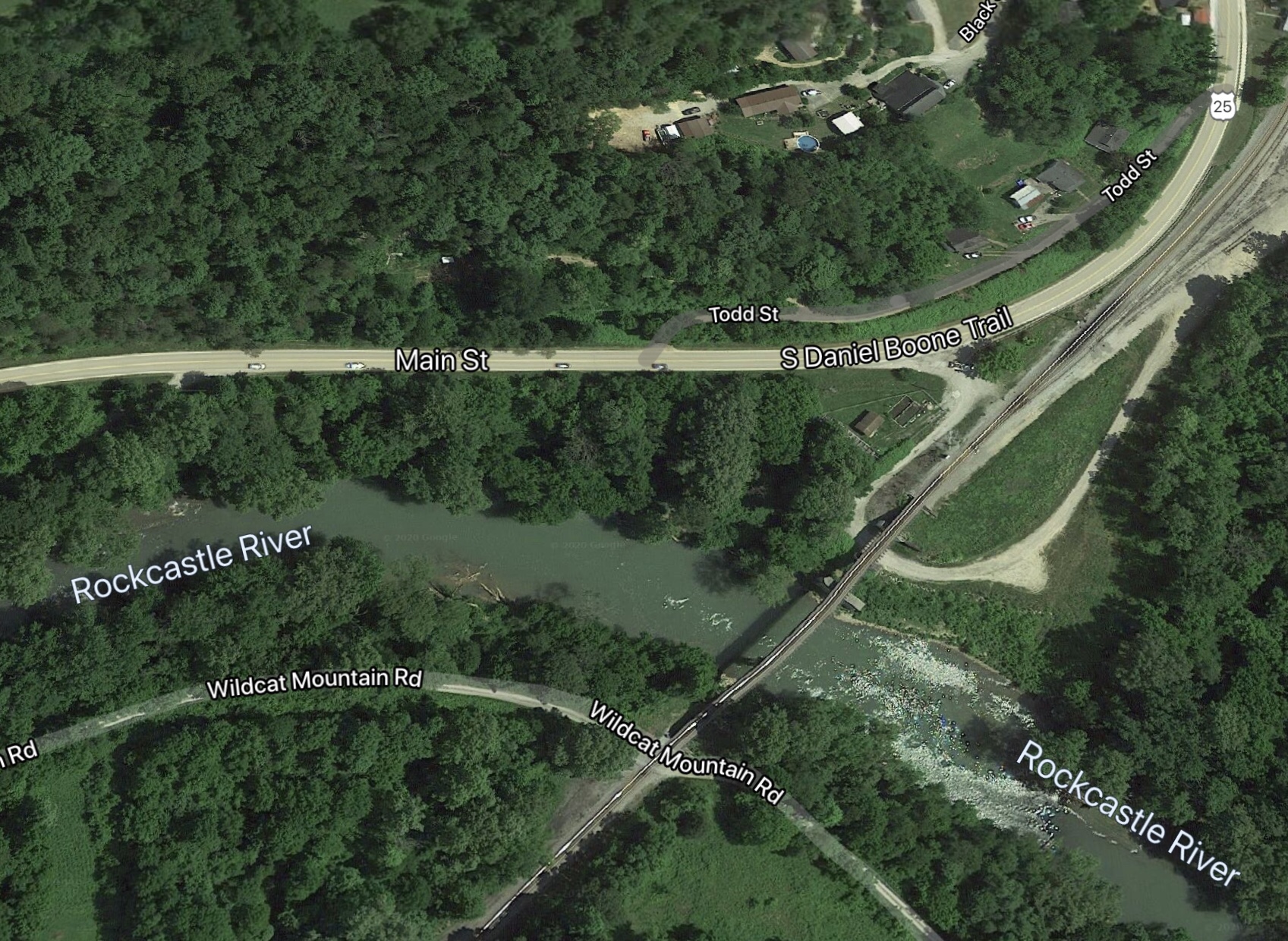 This is story that may or may not have happened in the summer of 2018 on a motorcycle trip with a few good friends. This story is fictional to any readers (or wives) who wish to use it against any of these supposed friends of mine. Places, names, and my memory has been altered to protect those who may (or may not) have done these things.

In the summer of 2018, there was a group of us riding motorcycles in Kentucky. We were adventure riding…it’s riding dual sports with all your camping gear packed in saddle bags. It’s great fun on and off-road. If you’re familiar with the Wildcat Memorial in the Livingston area, there’s a good size stream (or small river) called Rockcastle River. It’s usually about 50 feet across and depending on recent rain, Rockcastle can be about a foot deep, or it can be over 4 feet deep where a 4 wheel drive road crosses over it. Yes, you read that right, part of the road goes through the river.

This river can be a problem when crossing on motorcycles. If the water is under 2 feet deep, you’re probably ok…but if the water is over that…you risk water getting into your engine and killing it. More than one person in our extended network has had problems. One trip I had taken with a couple of these guys had ended when Kyle swore his bike could make it across only to drop into a deeper hole about 3/4 of the way across and his engine air intake took in water when his seat disappeared below the water line. For the next 3 hours we fruitlessly tried to revive the drowned bike, only to have to get the trailer and tow it home. Brian had also dunked his bike on this very crossing on a different trip.

We like to ride off-road on these trips as much as possible…Wildcat area has some fun gravel roads and places to ‘play’ but it’s kind of a dead end if you get to the Rockcastle and have to turn back. Backtracking will cost you about 30 minute to get to the same place across the river.

On this particular trip, we came down the hill from the Wildcat Memorial, crossed over the train tracks and came to the edge of the stream. We shut the bikes off, walked the banks and studied the depths…we cracked and had a beer as we sat under the shade for a minute. We had some decisions to make as lunch was becoming more and more on our minds.

Where we decided to go was 10 minutes across that creek…but a good 30 minutes to backtrack the road we had just come down. No one thought it was a good idea to cross the creek, but no one wanted to backtrack either. We sat there for a minute.

Two of the guys walked back up the road 70 feet to a railroad track behind us while a few of us were taking one last hard look at the stream.

Those two came back and offered up a third option.

We could cross on the railroad bridge.

We could do… what…???
Ok, that was crazy enough to justify taking a look. We put our gear and helmets on…we rode up to the railroad tracks and looked across it.

The top surface of the bridge itself was about 14’ wide (I’m guessing) divided into thirds with all loose gravel base and large metal parallel rails that rose out of the gravel a good 6 inches.. The outer third was gravel with a meager single hand rail for maintenance crew, followed by the middle third between the raised rails that was loose gravel, and then the other side with another single meager handrail.

If you rode down the center of the bridge you had to contend with the rails. They stuck out of the gravel maybe 6 inches and would be great to guide someone down the center of the tracks…but if the need to get out of the tracks arose, they might prove to be difficult to get over them and out of the way if needed. The outer edges had enough space to ride on, and I suspect that you could stand on the very outer edges of the gravel and the train would not hit you, but you would have to be way out on the edge of the bridge and the lack of guardrails and the height, not to mention a train running by you would be unnerving. It could be done, but it was going to be a little scary too.

We all stood there, studying the track, talking it through, and reading the obligatory “you will die crossing the bridge” warnings followed by the “if you don’t die all the way, we’ll put whatever is left of you in jail” sign.

As we stood there, a red pickup truck drove off the road on the other side and stopped next to the tracks like he was waiting for someone or something. We watched the driver, he watched us. Was he police? Was he some kind of railroad FBI? He started eating his lunch and we went back to thinking through our Nitro Circus stunt.

Two riders, I think I’ll call them Kyle and Danny (clearly hypothetical names of course), pointed their bikes towards the bridge and said, “just say the word and we’ll go’. But I didn’t like the idea….I didn’t like it at all.

Since we could not see around the bend, it was impossible to know how close a train was. I took off my helmet and put my ear to the track like I had seen done in many western movies…there was no sound. I was thinking that was good…but then again I had never done that before so I was wondering if this were an actual thing or was I betting my life on a Hollywood gimmick?

We looked at the track and thought through how long it might take for someone to cross over.

But if a train came around the corner of the hill…and you were halfway, you would probably have an butt puckering moment where you might have to gun it and play chicken with a train because the rails and tight radius would make it impossible to turn heavy bikes like ours around. There would be no turning back, once you were on, you were committed.

The leader of our group put it to a vote…and asked everyone “does anyone feel strongly about this crossing?” There was a few seconds where the rest of the group weighed out going across. Some were all for crossing, some were not so sure, but I literally stood alone as the one person who said I didn’t think we should cross…I said I would catch up to them down the road.

As we stood there, starting down the tracks in one direction, we turned around and noticed there was a man walking up the tracks towards us from the opposite direction about 30 yards out. He was a much older man wearing tattered overalls and what looked like an old engineers hat. He appeared out of nowhere and was walking slowly towards us like a ghost. My Spidey senses tingled and I didn’t like the feeling I was getting.

I definitely was not going now…..I was spooked.

The leader of our group must’ve felt the same thing. No sooner that we noticed this man and he made the call for all of us. We were going around.

And just like that, we abandoned the bridge crossing and started up the road.

We quickly went up the hill, passed the Wildcat Memorial, and then down the hill, wound around the bend and turned a corner to the railroad crossing. It was probably a total of 4 or 5 miles from our river crossing, but where the paved road crossed the railroad tracks, we were stopped by blaring bells and red lights as a massive train roared by us.

I was in a slight shock as reality set in.

“IS THIS TRAIN ON THE SAME TRACKS, THE SAME TRACKS THAT CROSSES THAT BRIDGE???!!!! DID THIS TRAIN COME ACROSS THE BRIDGE WE JUST THOUGHT ABOUT CROSSING!!!” I asked dumbfounded and shocked. No one really wanted to acknowledge that it was the a train that had come down the same tracks we had stared at a few minutes prior. The timing was eerie and unbelievable and we didn’t talk much for a while over the headsets.

I think we all knew that was too close to laugh about…but maybe it was just me.

There is no way of knowing the exact timing of the train crossing, but there is no arguing that it would have been very VERY close. In my mind, we had just avoided what could have been a bad situation.

We will never know how that would have played out.

We could have crossed without incident and taken off down the road and never known about the train.
We could have had a complete disaster on our hands.
We could have gotten caught on the bridge but the train could’ve stopped in time to avoid everything except the “persecute you ’til kingdom come” part.
We will never know on this side of heaven.

But… I pay attention to that that voice in my head says.

I remembered this story and knew it was the next one I would tell…but why tell this story?

I wrote the first part of this in a couple days…reworked a couple places, but the bones were set quickly. The 2nd part of this I took to God…I needed Him to help me write the end. A week later, today, as I sit drinking coffee on a Monday morning, I feel I have a part of it.

Life is a journey. A grand adventure. There are always risks, there are always some levels of assessment when looking at something where you know you must step out, you must put some things on the betting table that may end up doubling, or they may be wiped out.

ALL on the line… like when it’s the train bridge where you stand alone against a group of friends that want you to cross with them…all the while a train is bearing down on this decision on an all or nothing play.

IF you’re reading this and you’re standing, looking across a long bridge that appears quiet and serene…but in your heart, you know there is risk…

What do you really gain by taking this risk?
Are you going against your inner voice because all the others are telling you to ignore it?

Again…what do you gain with this risk?

What I am saying is that if the risk is high, make sure you put your ear to the rail in your spirit and ask God before you set across.

One thought on “Ear To The Rail”

This site uses Akismet to reduce spam. Learn how your comment data is processed.